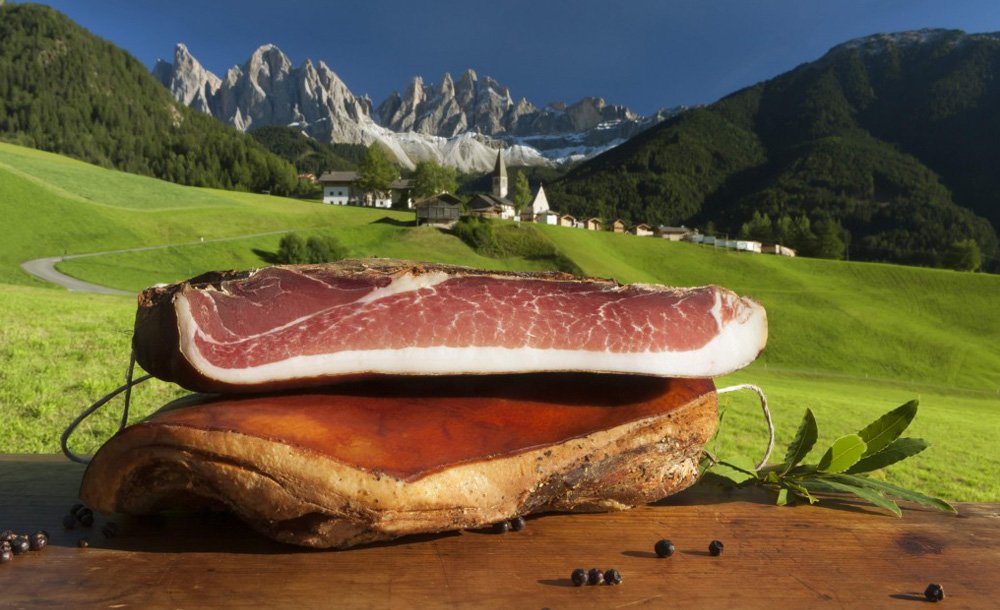 Speck in Val Pusteria and throughout South Tyrol is the most popular ingredient in traditional cuisine. Perfect with a good glass of wine, it has a history, closely linked to this land.

Alto Adige speck is produced with boned pork legs, trimmed with or without rump. The manufacturing process is protected at a European level even in industrial realities of large companies in Alta Pusteria, such as Senfter, or in farms where it follows centuries-old procedures. For many generations, slaughtering has been carried out in the farms during the Christmas period, and then production begins.

The choice and cutting of the meat are very important for the success of the product: the meat used to produce the speck is selected from the best pork legs, which are boned and artfully cut. Sudtiroler speck or Sudtiroler Markenspeck (in German language) is made from a fine cut of pork, the leg is then expertly flavored with spices and aromas before being subjected to smoking and aging. The smoking of the meat is done with carefully selected wood, which will greatly affect the final taste of the product; in Val Pusteria spruce and pine are used, in other areas also silver fir or beech.

The smoking process is carried out cold with a smoke that does not exceed 20 ° C and lasts for about three weeks. Then, the drying process begins where temperature and humidity are very important. And in a maturation period of between 20 and 24 weeks, the product is ready to be consumed. The rules provide for slices about 3 centimeters thick, which allow the piece not to lose the spice crust. A final advice for consumption: do not remove the white part of fat. It contains a lot of flavor and is essential for a complete tasting experience.

The origins of speck are lost over the centuries. The first historical documents where the word speck appears date back to 1700, but before then it appears in 1200 in the accounting records of the Tyrolean princes with its German name "bachen", which means "tied and hung".

Speck was invented by farmers as a method of preserving meat and for many years it was intended for domestic consumption. Later it spread to butchers, where it will begin to be called speck, which in German literally means "fat", "lard".

In the kitchen, speck is excellent to be enjoyed in slices, to accompany cheeses and olives in tasty aperitifs perhaps with a good local wine, but also to make first courses, to try with red radicchio, and second courses, for example in meat rolls. . Among the traditional South Tyrolean recipes that involve the use of speck, we cannot fail to mention the exquisite canederli.