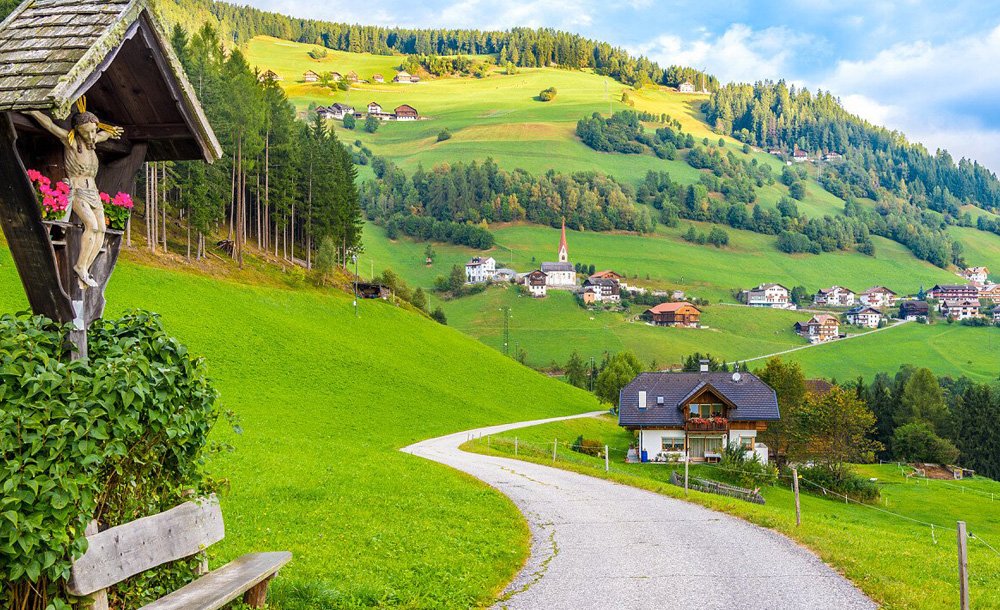 San Lorenzo di Sebato is a merchant town in Val Pusteria that extends between 748 and 2,194 m asl. It is located on the border between Val Pusteria and Val Badia, and not far from the major centers of interest in the valley.

According to some, San Lorenzo di Sebato was born from a small feud between the bishop of Bressanone, who had founded Brunico in the thirteenth century, and the counts of Tyrol, who also wanted to have a village. Sebato derives from the name of the Roman statio of Sebatum, which has its remains right near the town. There are many archaeological remains of houses, warehouses and lodgings of the time.

Among the points of interest in the locality is Castel Badia, a 10th-century construction, which in 1000 was the place where justice was administered in the valley. Castel Badia in German is called Sonnenburg, where the "Sonne" part does not derive from the literary translation in Sun, but from the old German "Siona" which means "judgment". Over the centuries it was destroyed first by a small war between the abbess of the castle and the bishop of Bressanone, then by a fire. In 1785 it began to fall into disrepair until in 1974 it was restored to become a hotel.

Another place not to be missed and which offers us a journey into the Middle Ages, is the Castle of San Michele, Michelsburg. The name is an Italianization that took place in the Fascist period, and differs greatly from the original intentions: the German Michelsburg was understood in the sense of "michel", which means great and majestic.

It is located in San Martino and dates back to 1165. It is not possible to enter inside but to see it stand out from the 965 m high hill. it is always a show. In the Mansio Sebatum Museum inaugurated in 2011, it is possible to discover the history of the population of the Sevati, the Noricum and the Roman Mansio. No less interesting is a visit to the “Antiquarium” Museum, where you can admire the finds that date back to the Middle Stone Age, and also include the Roman period up to the early Middle Ages.

In the municipality there are also a series of well-preserved farms that offer another journey into the history of our valley. A pilgrimage destination is also the ancient church of Sares, in the San Lorenzo area, it is the connection between the two German and Ladin linguistic and cultural areas. The small church of S. Maria di Sares dates back to 1653 and here you can admire the Black Madonna with child. It can be reached on foot via the path of the cross and is, like many churches in the valley, a jewel set in nature.

Not just culture! In summer this is a point of interest especially for hikers and bike lovers. The Val Pusteria cycle path passes directly in front of the village. In winter, on the other hand, skiing and snowboarding are guaranteed in the nearby Plan de Corones ski area, which ensures lots of fun with over 100 km of slopes.