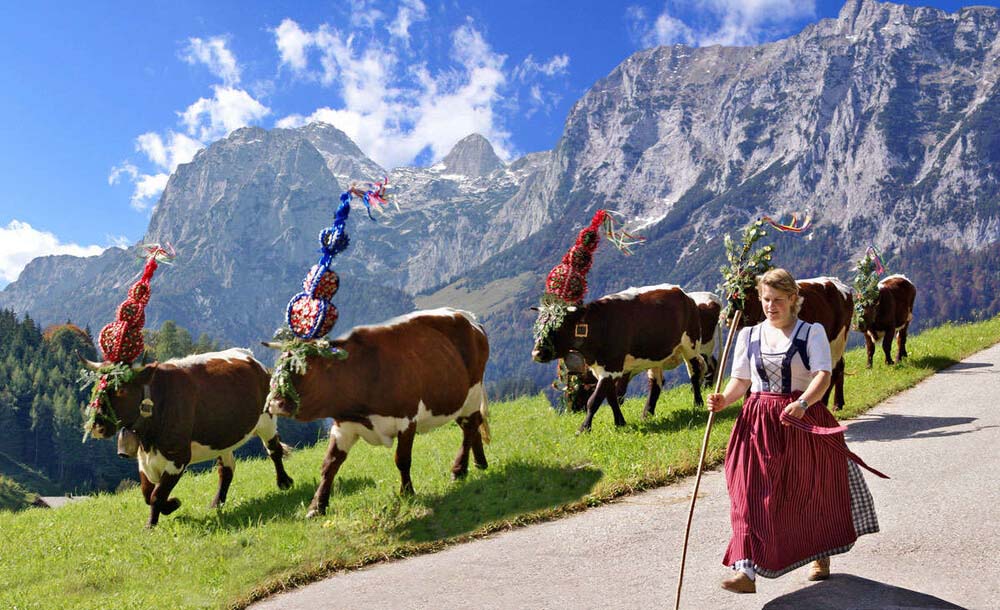 A river of sheep and cows running through the valley. This is the Val Pusteria transhumance: the moment when shepherds bring their herds back downstream, after the summer season in the open air. It is a magical show to attend, also because this moment in Val Pusteria is worth like a party.

Cows and sheep are adorned with flower crowns and necklaces, cowbells, peacock feathers and beads. This is the homecoming party, to be shared with all tourists included, who are immersed in a tradition that has been repeated for centuries, every year.

The Tures valley and the Aurina valley organize a big party on the Riva di Tures, in the Terento valley this special day is topped with typical dishes and folk music.

From the Val di Funes pasture, the shepherds set off at the first light of dawn from the Gampen pasture to gather the cattle. The cowbells that are assigned to each cow depend on their size, and their ability to make them ring. The decorations with wildflowers and mountain pine are an ancient custom: they served to invoke protection and drive away evil spirits. In this particular area, the herds arrive in the morning in Ranui, and Santa Maddalena. The festival, made up of music, markets, and traditional and handicrafts such as the Krapfen, takes place on Bergerplatz.

In Brunico there is another great moment dedicated to transhumance Val Pusteria. All the animals (cows, calves, goats and donkeys) ended their moment of relaxation at high altitude, are accompanied to the valley by the Goaslkrocha (whips), the traditional Schuhplattler dances, and an atmosphere of colors and music. We eat peasant barley soup (Trischtlan), press dumplings, drink the new wine and breathe the air of the real mountain, that of those who respect its rhythms and traditions.

The transhumance feast Val Pusteria is an unmissable appointment for many places in the area: from Maranza to Terento, from Rodengo to Sesto. Also in Hopfgarten in the Defereggen valley and in Hochfügen in the Zillertal valley.