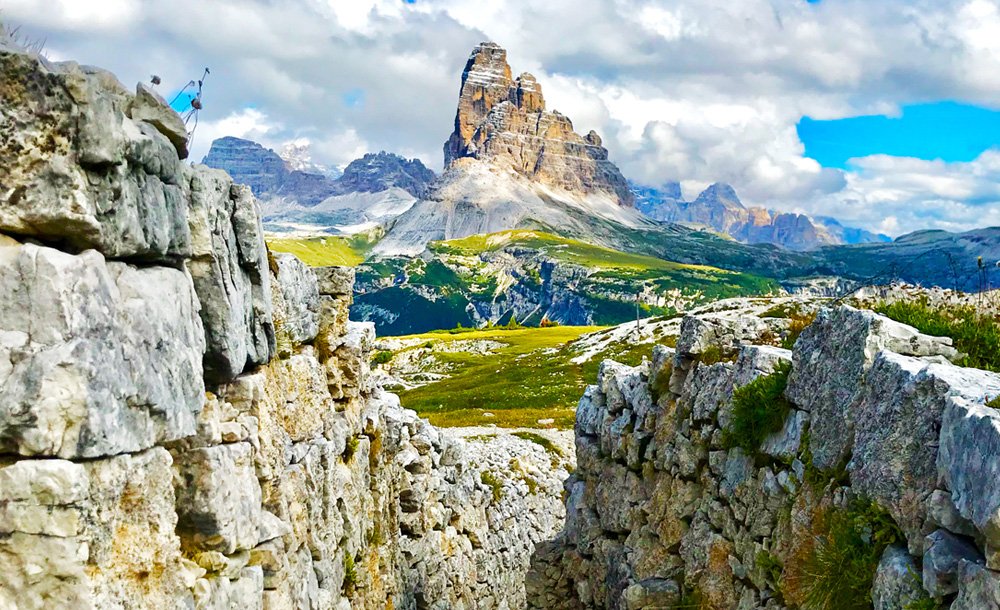 Monte Piana is also part of the Dolomite area famous for being a World Heritage Site. 2,324 meters high, it is partially protected in the Tre Cime Natural Park and contains a great piece of history of the Valley and of all of South Tyrol.

During the First World War the Austrian and Italian soldiers clashed right here, on the summit which at that time was the border between Italy and Austria. To defend this crucial point of the territory, tunnels, galleries and trenches were dug. The trenches can still be visited, many have been carefully rebuilt. In the battle 14,000 soldiers between Italians and Austrians lost their lives, now buried in the war cemetery of Croda Bagnata in Dobbiaco.

The findings of the mountains are kept at the Bosi Refuge. Inside the refuge we discover the history of Maggiore Bosi, while outside a real open-air museum starts, along a hiking trail. To visit all the points it is recommended to have some experience in hiking, but even the most exposed sections are still secured with ropes.

To reach Monte Piana it is possible to take a shuttle that takes you to the Bosi Refuge, at an altitude of 2205 meters. The service retraces an old military road from the First World War which, in the upper part, was carved into the rock.

The most difficult route is the one that starts from Val di Landro and lasts four hours. The exposed passages along the route are well secured, but the road is very steep. The easiest walk lasts two and a half hours and starts from Lake Antorno in the direction of the Auronzo refuge. It passes through the woods and arrives in less than half an hour on the driveway that takes us to the military road.

From Monte Piana you can enjoy an incredible spectacle. We can admire the north-west side of the Tre Cime, the Cadini, the Misurina Lake with the Sorapìss behind it, the Val Popèna and the Cristallo, the Croda Rossa d'Ampezzo, the Picco di Vallandro, the Monte Rudo and the Rondòni and dei Baranci: a 360 ° of unparalleled beauty.

So much so that it was chosen as the setting for the Star Wars chapter "Solo: a Star Wars Story". Some scenes were shot between the Tre Cime and Monte Piana