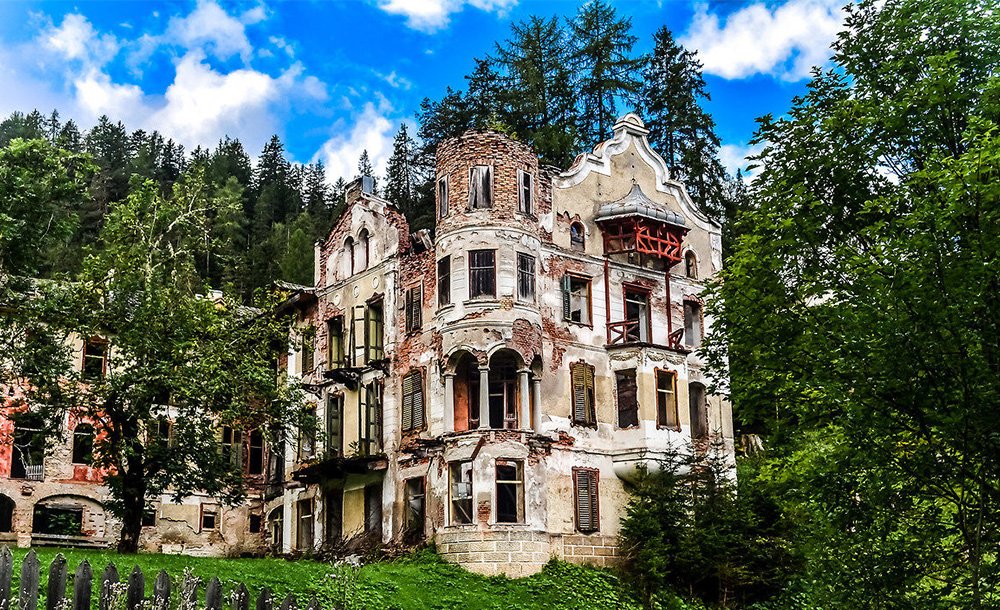 A piece of history in Val Pusteria! The excursion to Bagni di San Candido is a splendid walk in the woods suitable for all families, which leads to the ruins of the Grand Hotel which was partially destroyed during the First World War, and then abandoned to decline. It is a place that retains its charm, even if it can only be visited from the outside. Bagni di San Candido è una splendida passeggiata nei boschi adatta a tutte le famiglie, che porta alle rovine del Grand Hotel che fu parzialmente distrutto nel corso della Prima Guerra Mondiale, e poi abbandonato al declino. È un luogo che mantiene invariato il proprio fascino, anche se si può visitare solo dall’esterno.

Near the ruins there are five mineral springs which are called Imperatore, Lavaredo, Sulfurea, Fiera and Candida. In this idyllic setting, there is also the San Salvatore Chapel which dates back to 1591.

By taking the Baranci chair lift it is possible to go up to 1500 meters from where it is possible to descend to the Bagni di San Candido and taste the thermal waters. The walk in the woods is very suggestive and once you get to the baths you can give free rein to the adventure.

The Baths of San Candido have a much older history dating back to the time of the Illyrians and Romans. Illyrian coins and Roman amphorae were found on the site, which probably date back to the period between 70 and 160 AD. C. The structure we see today was built in 1586 by the Hungarian doctor Johann Graf Scheiber, and later transformed into a Grand Hotel. Since the Middle Ages, the thermal springs in the area have always been places of interest for healing and healing. Subsequently, in addition to diving into the sulphurous waters and using them for beneficial wraps, hotel guests came here to sip the healing waters. Today the wonderful area of Bagni di San Candido is composed of a path that runs along the thermal springs and green meadows where you can run barefoot, perhaps bathing along the stream that accompanies us in the area.

Among the imposing peaks of the Baranci, the walk continues to the Jora Refuge which invites you to a hearty typical snack. To descend from the Baranci, an unforgettable Fun Bob ride open in summer, suitable for adults and children.